Steam turbine experts at Mechanical Dynamics & Analysis (MD&A) have completed LPB rotor and diaphragm repairs of a spare 410 MW GE® G2 design unit. The site had removed the crossover and outer shell to find severe damage and missing blades in the turbine’s low-pressure section. MD&A was contracted to inspect the spare LPB (low-pressure B turbine) rotor and diaphragms and determine needed repairs. 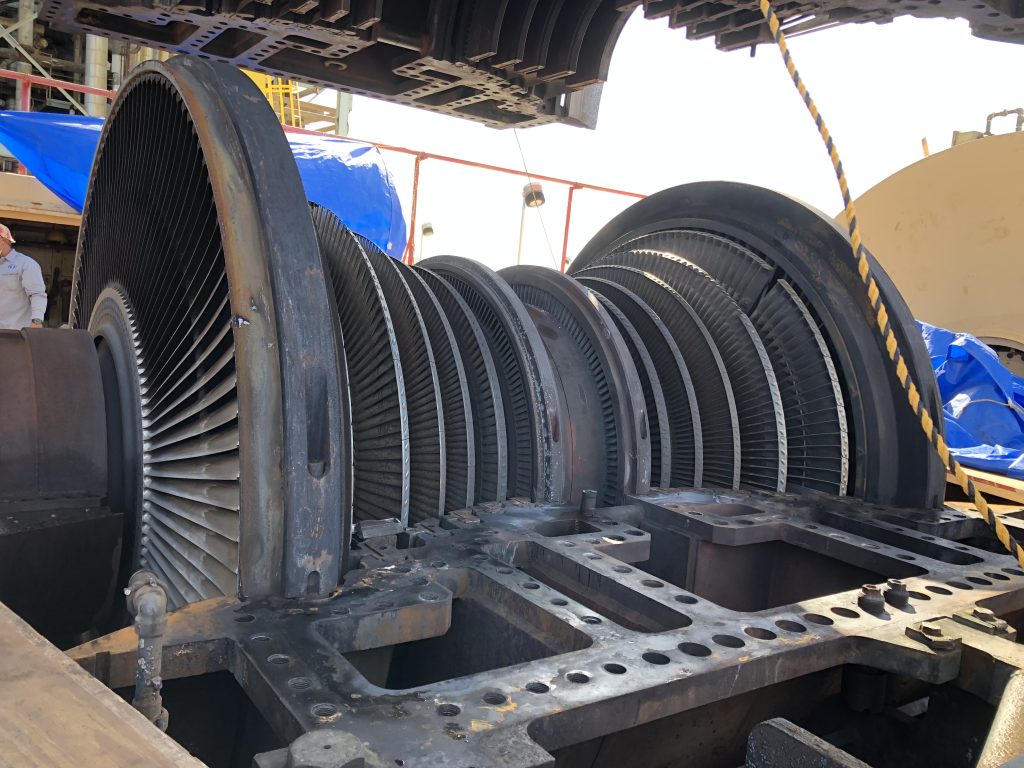 In this unit, the HP-IP section contains 12 stages. LPA and LPB each have 7 stages per flow, stages 13 through 19.

The rotor was blast-cleaned followed by visual, non-destructive examination, and dimensional assessments.

Turbine-end and generator-end couplings had minor rust and pitting on the faces and outside diameters, and numerous coupling holes showed moderate galling. MD&A would remove the galling to prepare for proper on-site reassembly. The generator end rabbet fit was peened and machined to maintain diameter and remove .002 in. runout when operating on both journals.

The two journals, T5 and T6, had moderate surface rust, pitting, radial scoring, and between .002” and .004” taper. Both were machined to remove the taper and damaged material, and oil seal lands were strap lapped. 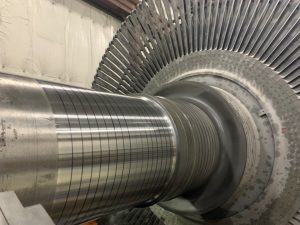 Minor repairs were performed on stages 13 through 18. Leading and trailing edges were straightened and blended, and polishing removed foreign object damage.

Six buckets with severe tenon erosion were replaced on the stage 18 turbine end (TE), including the titanium notch blade. Stage 18 (L-1) TE and generator-end (GE) tenons were high-velocity oxygen fuel coated with chromium carbide to slow the progress of erosion.

At stage 19, the L-0 row, both the TE and GE buckets had heavy erosion on the discharge side of the leading edges. Due to the long lead time for bucket replacements, MD&A experts recommended annual, in-hood inspection of erosion while procuring new buckets for replacement at the next major outage.

NDE (MT and PT) was performed on the diaphragms. Common to all was moderate pitting on the partitions, setback faces, appendages, horizontal joints, and diaphragm body.

Of highest concern was pitting on the partitions. This had created small holes near some trailing edges.

Also noted was a large amount of missing hardware. Several lower half diaphragms did not have support blocks, and no joint bolts were present for stages 13 or 19.

Stage 13, the first low-pressure stage, is a bolted assembly consisting of both the turbine-end and generator-end diaphragms. The heavily eroded appendage was weld repaired near the joint where damage was most severe. High spots from FOD were removed and trailing edges were hand-blended and straightened. Indications found on previous Inconel restorations were also repaired.

The base material of the stage 14 partitions had moderate to severe pitting on both the concave and convex sides, which was repaired. High spots from FOD were removed and trailing edges were blended and straightened. Four new support blocks and new keys were provided.

Stage 15 partitions had moderate erosion and pitting. Pitting near the thin trailing edges had created small holes. If not repaired, more holes would appear and pieces would liberate and move downstream. Major Stage 15 repairs, therefore, became critical. MD&A specialists repaired the trailing edges by cutting back to a minimum thickness of 0.125 in. and welding new partitions in place, hand-working to match the incoming profiles. A damaged root radial seal was also repaired. Support blocks and various screws and keys were provided.

Although not as severe, small holes were found near the trailing edges of stage 16, primarily near the corners. Stage 16 joint blades were more severely damaged. All affected areas were cut back and repaired with Inconel. The remaining blades were straightened.

At stages 17 and 18, there was moderate damage to the joint blades, causing trailing edge deformation and small tears. These were weld-repaired, as was all FOD.

All damaged packing retaining pin holes were weld-repaired and extra stock was welded to the crush pins to be fit on-site, to expedite reassembly. Broken diaphragm key screws were replaced, and new keys were made to replace those missing.

After all the repairs were completed, a high-speed balance was performed on the LPB rotor. The rotor was cleaned and prepared for shipment.

MD&A analysts recommended that the site monitor any pitting on the rotor and diaphragms and any progression of tenon erosion. Major future repair to stage 14 diaphragms should be considered.

For the stage 19 L-0 buckets, annual in-hood erosion inspections should be performed until near-term replacement.

MD&A completed both analysis and repair of this spare LPB unit on schedule and returned the unit ready for full service.

MD&A experts focused on detailed analysis and needed repair while leaving the owner/operator with both near-term confidence and a long-term plan for reliable performance of this critical G2 design unit.