The affected units consisted of two GE® Lynn generators that were experiencing both aging and flooding with water due to leaking hydrogen coolers. Prior to this, others had tried unsuccessfully to dry out the windings and attain suitable test results. MD&A’s Generator Specialists determined that the proper solution was to rewind both stators, rewind one field with new copper, and while remaining focused on returning the units to service as quickly as possible. Concurrently, our Gas Turbine Services specialists performed a modified hot gas path inspection on the GE® 7B turbine. 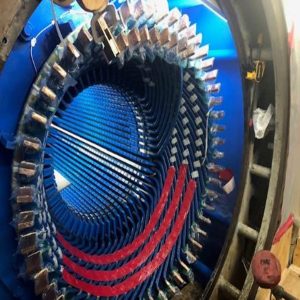 The existing wedge systems were first removed. Measurements were taken to reverse engineer and manufacture new flat low-shrink black-canvas wedges, and existing filler was removed and measured as an accurate baseline for re-wedge operations.

Series loop and circuit ring connections, bar ties, and bars were then removed, followed by the binding bands to access the existing axial supports. A post-removal ELCID confirmed that no damage had been inflicted on the units during the disassembly process.

The terminal plates were removed allowing replacement of the deteriorated gaskets along with new high voltage bushings and current transformers (CTs).  The original HVBs were sent to MD&A’s St. Louis Service Facility where they were disassembled so that the copper studs could be assembled with all new components.

Turbine and collector ends, as well as the slot sections of both stators, were prepared by means of CO2 cleaning then painted in preparation for installation of the new windings.

MD&A returned to the site for reassembly after the manufacture of new stator bars.

The Unit 3 coil was removed and transported to our one-stop-shop repair facility in St. Louis, MO. The forging was then blast cleaned, and main leads were refurbished with new copper.

NDE was then performed on the forging, retaining rings, and snap rings. The forging was then prepared and staged in the clean room for winding with new copper.

With temporary support wood in place, copper installation (0 and 180 deg.) with sequenced testing began. Top coil jumpers were then installed.

Following this and with final electrical testing complete, the field was moved to the MD&A High-Speed balance facility and then prepared for the return shipment. 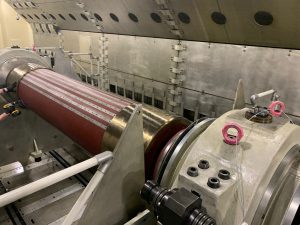 To expedite the schedule, an initial wave of bottom stator bars was sent to the site while the remaining bars were in manufacturing. Outside binding bands were installed by re-mobilized MD&A personnel, then three bottom bars were fit into 120-degree-apart slots to ensure proper alignment to the circuit rings. 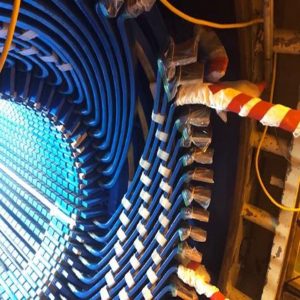 Two top bars were also aligned with the pitch of the bars to ensure the top and bottom bar series plates were aligned properly, and to avoid any alignment issues during the rewinds.

A thin layer of glass laminate was installed on each slot as a uniform surface for the bottom bars.

Bars were fit onto a shoe on the collector end and carefully transferred through the bore to the turbine end and properly set into the slots. Nine close-up bars were left temporarily tied to assist with final installation.

Conductive side ripple springs were installed axially throughout the bore to ensure all bars were properly seated and to eliminate bar vibration during operation. Following placement of new slot RTDs, top bars were then installed, blocked, and tied, including installation of side ripple springs.

Installation of center and body wedges followed. End wedges were cut with an axial pinhole, and adjustment wedges ensured precise alignment with ventilation holes. Brazing of series connections between the bottom and top bars was then performed along with brazing of phase connections.

Blocking was installed and tied between each series loop to reduce vibration. Flooding varnish was also applied to the end windings and all accessible ties and blocks.

Frequency response and modal testing were performed with good results. Terminal plates and bushings were installed with new locking tabs and hardware.

Eight new dual-element RTDs were installed on each unit, and the two RTD glands were replaced to prevent any future hydrogen leakage.

Final testing confirmed the units were fit for continued operation. MD&A’s proactive recommendation to the owner/operator was routine maintenance every 30 months of operation for minor inspections and every 60 months for major inspections.

During this outage, MD&A’s Gas Turbine Services specialists performed a modified hot gas path inspection on one of the Frame 7B units, clearly illustrating both technical diversity and customer confidence in MD&A’s full-scope capabilities. 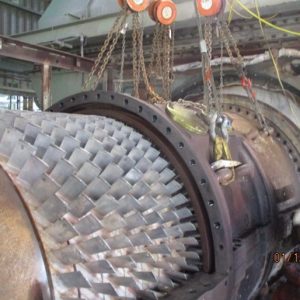 In general, minor foreign object damage was noted along with thermal barrier coating (TBC) loss and several non-critical cracks. First stage nozzles, however, required additional action. Due to excessive TBC loss and critical cracks in various locations, these nozzles were replaced by MD&A with a refurbished set. 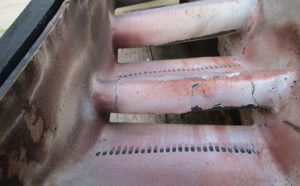 First stage shroud inspection showed that one seal had migrated aft. This seal was re-inserted and re-staked.

Beyond-traditional-scope work was also performed. MD&A installed lube oil coolers, make-up cooling water piping, and vent and drain valves, and performed a complete borescope inspection of the compressor section, which resulted in the removal of the upper half fuel gas manifold and upper half compressor casing.

For the generator, T-4 and T-5 bearings were replaced with refurbished parts. 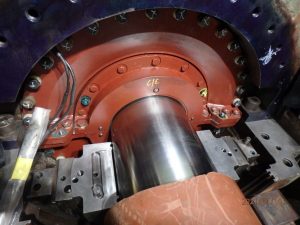 Also, hydrogen seals and housings, and inner and outer oil deflectors, were replaced on both the turbine and collector end bearings.

A visual inspection showed no indications of any issues with the accessory gearbox.