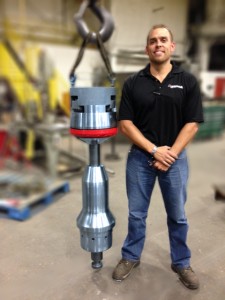 I am originally from Kansas City, KS, where I joined the U.S. Army at the age of 17 and served a total of eight years in the 82nd Airborne Division in Fort Bragg, NC. In 2008 I decided to get out and go to school for Mechanical Engineering, after which I was hired on with MD&A as a Project Manager within Machining Services.

I run the day to day activities in the valve shop; managing the disassembly, cleaning, inspection, repair, and reassembly of valves while they are in St. Louis’ Repairs Facility.

What aspect do you enjoy most about your role at MD&A?

What I enjoy most are the guys that I work with. Many of them are prior military and come with a similar mindset and work ethic as me.

What is the coolest job you’ve worked on?

Recently I have worked on the assembly of the very first 13” triple bypass MSV designed by the MD&A Parts Division. We were able to work directly with the design engineer in the shop, which added additional insight into some of the wear-resistant coatings and how the valve itself was designed to be more robust than previous models.

What is the most interesting challenge you have come across with valves?

Two seasons ago, we received a call that an intercept valve had seized, forcing an outage. Without having any prior knowledge of the valve, plant, or reasons as to why it seized; we were able to disassemble, inspect, repair the issues causing the failure, and reassemble the valve fully operational all within 36 hrs. This is a process that would normally take a week. Working with a group and coming together to attack and accomplish a task such as this is very fulfilling.

What is your personal motto?

Many people ask me why I do not get stressed during the peak outage season and everything is going so fast; it’s hard to keep track of it all and manage a large team of people. I chalk it up to my military background, but my motto is, “Life, limb, or eyesight! If you are breathing, have all of your limbs, and can see; everything will be alright.” None of this stuff is going to kill you, as long as you are safe. We may get behind at times or stress may affect some people differently, but as long as you keep your head down and keep moving forward, you will accomplish the goal.