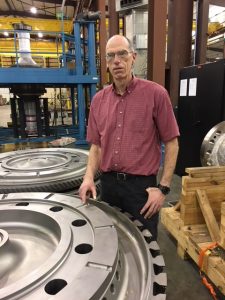 I’ve worked in the power industry since 1991 and on gas turbine technology since 1982. I’ve worked on everything from component design to power plant design, and from conceptual system studies to detailed analysis of fielded parts. I’ve mostly worked behind the scenes, but I spent a few years on a marine gas turbine project where I spent a lot of time with the customer.

I solve problems related to gas turbines for customers, suppliers, and colleagues.  Sometimes it’s done by performing an engineering analysis, like a finite element analysis. Other times it means explaining a process or describing how something works. And sometimes, it’s like solving a brain teaser, requiring me to think about the problem from a different angle.

What has been your favorite project at MD&A?

I’ve really enjoyed a recent opportunity on a gas turbine rotor project. I’ve spent time collaborating with everyone from our sales force to the supplier that makes rotor forgings. You’re never too old to learn, and I’ve learned a lot. One thing I learned on that project was I had to get up to speed on rotor balancing, something I never worked on before. I learned from some engineers my own age, but also from other engineers several decades younger than I.

What is the most interesting challenge you have come across?

I’ve recently been trying to figure out a solution to a disk cracking problem plaguing one of the OEMs. It’s a basic engineering problem, but after analysis, we are developing a robust solution to keep the customer’s gas turbine running.

How is the cyclic nature of Combined Cycle plants affecting the industry?

For increased cyclic operation of combined cycle plants, this creates a demand for faster startups and shutdowns, and/or for simple but elegant solutions like warming blankets. Faster and more frequent starts and stops means that low cycle fatigue becomes the dominant failure mechanism in most consumable parts. This, in turn, makes it important to understand the response of the turbine hardware to transient operation, which requires more complex analysis. Fortunately, it comes at a time when analytical tools and computational capacity have evolved enough to make the analyses possible.

If you could have a superpower, what would it be?

I’d like to be like Antman, so I could miniaturize myself and zoom around inside of a gas turbine to find the source of problems.